Another previously unreleased Velvet Underground track from the multi-disc White Light/ White Heat due out next Tuesday. 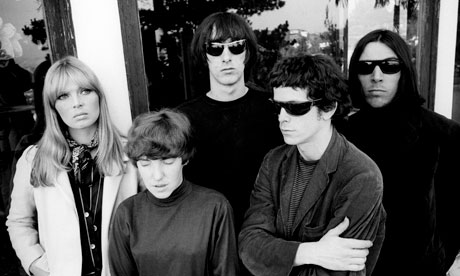 On December 10 the Velvert Underground’s White Light/ White Heat will be released as a multi-disc set with lots of previously unreleased material. Here’s a 19-minute live version of “Sister Ray” recorded at the Gymnasium in New York City on April 30, 1967. This video of the Velvet Underground performing in Hamburg at Alsterdorfer Sporthalle on June 11, 1993 starts in darkness, but after a minute or so the lights come on and you can see all of them playing. The sound quality is OK, but good enough.

The remaining three members of the Velvet Underground — Lou Reed, John Cale and Maureen Tucker — performed this tribute to Sterling Morrison at the Rock ‘n’ Roll Hall of Fame awards dinner in 1995. The Velvets were inducted into the Hall of Fame that night.

The Velvet Underground’s second album, White Light/White Heat, will be released as an expanded three-disc set on December 3, 2013.

In addition to remastered stereo and mono versions of the challenging album, there will be a bunch of alternative versions of tracks including “Hey Mr. Rain,” new mixes of “Beginning to See the Light” and “Guess I’m Falling in Love,” and previously unreleased vocal and instrumental versions of “The Gift,” according to Rolling Stone.

Plus a live set recorded at the Gymnasium in New York on April 30, 1967 that includes “I’m Waiting for the Man,” “Sister Ray” and “Run Run Run.”

“No one listened to it,” Lou Reed said in a statement. “But there it is, forever – the quintessence of articulate punk. And no one goes near it.”