“Opening up and finding what’s inside me to write.”

Neil Young bangs away at the chords. And there’s such sadness in his voice. He’s playing an acoustic guitar. He’s nearly finished his third song of the night. Banging away too hard. Or maybe the way he’s banging at those chords is perfect. And oh, the sadness.

In that quavering voice he sings:

Yes only love can break your heart, What if your world should fall apart?

When you were young and on your own, How did it feel to be alone?

She had long brown hair, almost down to her waist. She wore white peasant blouses and worn denim overalls. It was 1970 and the world was so different. There are a lot of clichés about the ‘60s, which actually didn’t end until the early ‘70s (countercultural movements don’t conveniently end as a new decade begins), a lot of misunderstanding about what it was like back then.

There was a day in 1970 when we sat together, her and I, in the swing that hung from a huge tree in her family’s very private, very large front yard, and the wind was making the leaves in the trees shimmer, and the future seemed wide open, full of possibility, I mean anything was possible. Her body warm against mine as we swung back and forth. The whole world about to be remade, I just knew it.

I am lonely but you can free me, All in the way that you smile.

Yes, that was exactly it. Exactly.

Neil’s music was part of my soundtrack during the ‘60s and the ‘70s. He sang the sad songs and as a teenager I didn’t want to know the pain I heard in his voice. But I did know it. Every time her and I were apart, I knew it. Still I loved to hear Neil’s voice.

And later, after it was over, when we just couldn’t make it together — that girl and I — I knew for real how true Neil’s words were, and today they’re still true.

Neil’s new album, Live at the Cellar Door, was recorded in 1970, 43 years ago, at the Cellar Door, a club in Washington, DC. Listening to it I see, hear, feel, smell those days, a rush of moving images, as if my life was captured on film and these old recordings are the key to starting up the projector. All the ways I blew it, and how crazy it got. And she wouldn’t take my calls, wouldn’t see me when I came to her door, and I thought I’d explode.

Yes, love can break your heart — a cliché and so what, ‘cause it’s the truth.

Hearing Neil sing those old songs in that tenor voice, the tenor voice of a young man, it breaks my heart all over again. Neil was 25 when he played those songs at the Cellar Door.

For the rest of this column, head to Addicted To Noise.

Next Tuesday December 10, 2013 Neil Young’s Live at the Cellar Door album will be released. Meanwhile you can preview it here. 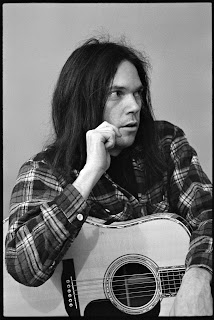 Young’s 1970 recording, Live at the Cellar Door, which is excellent, will be released December 10, 2013 but if you order it now from this site you can download the Cellar Door performance of “Old Man” immediately.

And you can hear it right now:

Live recordings drawn from six acoustic shows Neil Young did in late 1970 at the Celler Door in Washington DC will be released on CD and vinyl December 10, 2013.

The album, Live at the Cellar Door, contains a rare version of “Cinnamon Girl” performed on piano.” The shows took place from November 30 through December 2, 1970.

According to a press release from Warner Bros. Records, “The album, which features Young performing on acoustic guitar and piano, includes tracks that are interesting for several reasons, such as stunning live versions of songs that appeared on After The Gold Rush (“Tell Me Why,” “Only Love Can Break Your Heart,” “Birds,” “Don’t Let It Bring You Down” and the title track) and solo performances of the Buffalo Springfield songs “Expecting To Fly” (from their 1967 second album Buffalo Springfield Again), “I Am A Child” (from their third and final album Last Time Around and Young’s 1977 Decade compilation), and “Flying On The Ground Is Wrong,” from their 1966 self-titled debut.

“In addition, Live At The Cellar Door features early, raw performances of songs that wouldn’t appear until subsequent Young albums, including the rarity “Bad Fog Of Loneliness” (which appears on Live At Massey Hall ’71 – released in 2007– but was previously unreleased until the studio band version was included on Archives Vol. 1 1963-1972) and “Old Man” (released two years later on 1972’s Harvest album). “Down By The River,” also from Everybody Knows This Is Nowhere, rounds out the spectacular set.”

The track-listing for Live At The Cellar Door:

Only Love Can Break Your Heart

After The Gold Rush

Don’t Let It Bring You Down

See The Sky About To Rain

I Am A Child

Down By The River

Flying On The Ground Is Wrong