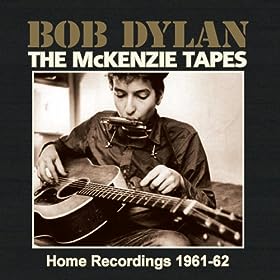 Recently the Dylan website Expecting Rain, brought to my attention a Bob Dylan CD for sale in the UK (mp3s too) of The MacKenzie Home Tapes, recordings made by Bob Dylan in the apartment of Eve and Mac MacKenzie in 1961 and 1962.

Based on listening to previews of the songs on Amazon UK, and a copy of the recordings I was able to download some years ago, I would not recommend this album to anyone but a total Bob Dylan completest. On the CD, many of the tracks are fragments.

While there are a handful of worthwhile songs from the sessions, those appeared on Sony’s 50th Anniversary Collection, which was released in a very limited edition in Europe last year to prevent the recordings from entering the public domain.

It is possible that those songs — “Hard Times in New York Town,” “The Death of Emmett Till,” “I Rode Out One Morning,” “House of the Rising Sun,” “See That My Grave Is Kept Clean” and “Ballad of Donald White” — will be part of one or more bootleg series recordings that will be released in the future.

You can hear excerpts of the songs here.