Good performance of one of my favorite Neil Young songs, “Don’t Cry No Tears.”

Neil Young is encouraging people to watch the documentary, “Under The Influence,” which is about how “corporations have usurped democracy by using their vast wealth to influence politics and silence the citizen voice in government.”

And he’s made available his new song, “Who’s Gonna Stand Up?,” which was recorded live in Liverpool on in July of this year.

This is all good. However, I’m disappointed in Neil Young because he, like many others who claim to be environmentalists, ignores the biggest cause of climate change in the world, which is the eating of meat and animal secretions (such as milk) and the use of products made from animals.

It would be good for Neil to watch the new documentary, “Cowspiracy,” and then encourage his fans to watch it too.

And if Neil gave up eating meat, he’d set a good example and he’d feel a lot better too.

This is a hot live version of “Down By The River” performed by Neil Young and Crazy Horse at the Boston Tea Party, Boston, MA
on March 1, 1970.

I’d like to sing you a song about a guy who had a lot of trouble controlling himself. He let the dark side side come thru a little too bright.
One afternoon he took a little stroll down thru a field and thru a forest, ’til he could hear the water running along there. And he met his woman down there. And he told her she’d been cheatin’ on him one too many times. And he reached down in his pocket and he pulled a little revolver out. Said “honey I hate to do this but you pushed me too far”.

By the time he got back to town he knew he had to answer to somebody pretty quick. He went back to his house and he sat down on his front porch. About two hours later the sheriff’s car pulled up out front. It started sinkin’ in on him what he’d done. The sheriff walked up the sidewalk, he said “come with me son, I want to ask you a few questions”.

As he heard the jail door shut behind him he sat down on a little wooden bench. And he looked out of the door – thru those bars – at this kind of wimpy looking sheriff out there. He started getting mad again and he realized what he had done.

There wasn’t nothing he could do about it now though. He just sat down and put his head down and he started thinking to himself “I’m all by myself here, there’s nobody on my side…..”

Thanks to Thrasher’s Wheat for this quote!

Neil Young, wore a black t-shirt with “Earth” on the front and played a beautiful Gretsch White Falcon guitar for some of his show at the Live at the Marquee festival at The Docklands in Cork, Ireland on last night, July 10, 2014.

“Who’s Gonna Stand Up and Save the Earth?” is a new song that Young played for the first time on July 7, 2014 in Iceland.

“After The Gold Rush”:

“Rocking In The Free World”:

“Who’s Gonna Stand Up and Save the Earth?”:

“Roll Another Number (For the Road)”:

Thanks to Thrasher’s Wheat for the set list and band info. 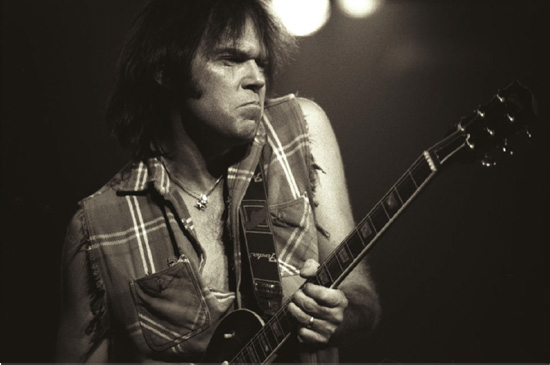